Hardly a fortnight as an Indiblogger and here it was! Invite to a blogger meet. The email reminded me of all the blogger meet posts I had been reading in the past years. Location on the invite-Gurgaon. Great! I knew I could think of attending. Day-Saturday! All the more better, since this was one of those rare days when I had nothing planned. So, I was going!! Sealed.

The invite said- 'Bring along your Family'! I had no idea how these meets were otherwise, but 'family invited' meant I was taking Sanket along. So, both of us, eager and hopeful to win a printer at the event *wink*, reached the venue, Fortune Select Global on MG Road.

Though late by a few minutes, we were lucky not to miss out on anything. The event started with giving out gifts to the guest of honours- the little kids, who were accompanying their parents/sisters/aunts. Then it was a chance for everyone on the floor to try their luck with the game- 'What's behind the number?' I was chosen as the first one to pick a number between 1 through 11. I picked up 7!! What did I win?? 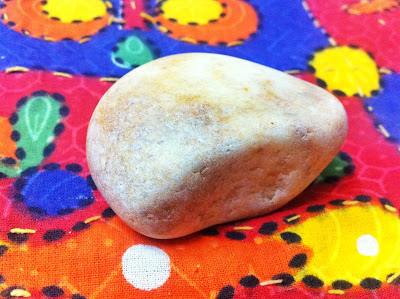 This stone!! Yayyy!! No, stones were not the only thing given away. Lucky kids won themselves speakers and headphones and 500 bucks and lot of applause.

This was followed by 'Back to school' regime. We were made to sing 'Old Mc Donald's had a farm...' in groups. Our very own Mr. McDonald had Zebras, Lions, Puppies and Chicks. Surprisingly, the squeaks and squeals of puppies grew into growling and barking that beat the roars of lions, and won them the 'Loudest Animals On Farm' award. However, it was more about having fun than winning. Nice choice of rhyme, I must say. Though not an easy one, none other could have been so interesting.

Next, it was time for Blogger Introduction. Something all of us had been waiting for. While I heard what all the other bloggers had to say, in my head I was preparing my speech, which kept growing larger with each passing minute. But alas! My name did not appear on the screen :( Maybe next time!! And yeah! We had a whole bunch of crazy bloggers, who competed against each other to get the title of 'The Most Crazy Blogger'! From people who visit places only to be able to blog about them to those who have had so many blogs that they have been unable to keep a track of the address to those who wore two different shoes (left-and-right) to the event to those who were JUST crazy!!

It was then the turn of the sponsors. The team from HP introduced us to their hit product, HP InkAdvantage Printers. The cost effectiveness and the ease of having a printer on your study table is sure to impress you. Well, we were! With less than a rupee being spent on a page of print, who wouldn't opt for it rather than running to the market. Cherry on top, 'call-to-get-cartridge' service by HP. Do I need to say anything more? You dial the number, tell the guy on the other side of the phone that you need a cartridge, he gets it delivered right at your footstep in a few hours. You are spoiling us, HP!

The presentation was followed by a small session by crafter and blogger, Karuna. She got some craft supplies and papers that she had printed using her printer at home, and was there to demostrate how interesting crafting can get with all the colorful printouts. She wanted volunteers for the demo and I could not hold myself back. I ran from the last row where I was seated, right upto the table and this is what I made in less than 2 minutes. 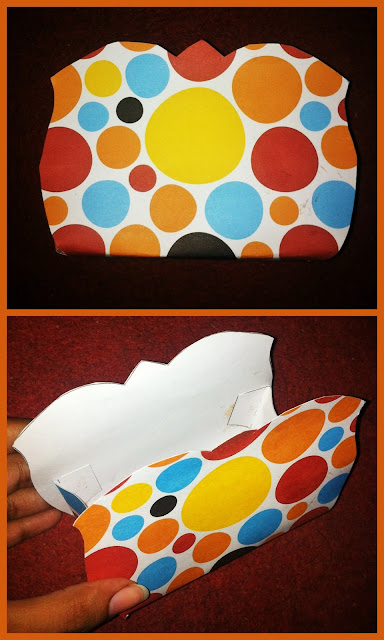 Meanwhile, Murtaza won himself a printer for unfolding the childhood mischief. He tweeted about how he was caught as a schoolkid while exchanging tatoos that he got for free with gums, in his school washroom. He sure was the naughtiest among us all. Atleast that's what the printer in his hands said.

The best was definately reserved for the last. The total gathering was divided into 5 groups. Each group was given a theme and party supplies and was asked to set up the Birthday Table. My eyes popped out at the sight of all the craft supplies. Our theme was 'Mermaid' and right from the word go, all 17 of us got to work. Balloons, streamer, bottle tags, glass tags, gift bags with tags, paper plates, napkin, cup cakes, banner, colors, glitters, paper, we had it all and more.

It's not easy for 17 people, most of them meeting each other for the first time, to accomplish a task like that within 30 minutes. The setup changed every millisecond. I kept bottles in one corner of the table, turned my back and came back to see the bottles somewhere else **smile** but it was fun.

We had a nice story to go with our setup. There was an underwater temple, mermaid posters, sea shells, special gift bag for Ariel's buddy Sebastian and more that I fail to recall now. Have a look at the pictures and spot things out for yourself.


This setup, ladies and gentlemen, won the first prize in the competition. Yes, 'Mermaid' was adjudged the best among Little Man, Rainbow, Planets and Pirates. The competition was really tough with splendid show of creativity on all the tables but the best stands out, right?? Aaahh, do I have to be modest all the time?? As the prize, each one of us got a wireless mouse.

Wait a minute, did I say that this competition was the last on the list? No! It was not. Splendid food, from chicken quiche and mutton cutlets to idli-vada-sambhar to ice cream and pudding to tea and coffee was laid on the table for all the bloggers.

And not to forget the t-shirt distribution. Sanket and I were the last ones to collect our t-shirts. Only sizes left were XS and XL. Looking at the size, both of us picked up XS and the t-shirt fits Sanket really well. Wondering how HUGE XL would have been. And pity all the fit gentlemen out there who grabbed Size M. 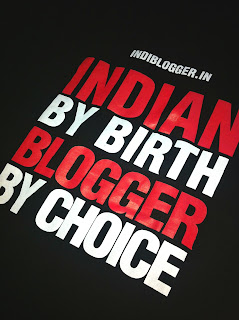 BTW, to all those who were there, how did your t-shirt fit you?

This was a round-up of the event. I have barely been able to capture all the fun we had, here in this post. Not to forget the giggles and loud laughs that I could not include here. You have to be there to feel it. We did not carry our camera and were too awestuck by all the crazy fun things happening around us to take some from our iPhones but I now know all the do's and dont's for the next meet.

Hope to see you next time, if you are an IndiBlogger. Hope to be able to introduce myself and my blog. Hope to win more prizes. Hope to have fun. Hope to make new friends in the next meet.