Had it not been for a broken laptop screen, my early to bed routine of late and a not-busy-but-occupied head, this post would have been published a few days back. Nonetheless... it's HUNDREDth! A landmark touched and landmarks are special. Aren't they? I wanted the 100th to be about Holi, then Holi and Dravid and now it's so late for both that I do not know what we will be talking about today.

IPL (Indian Premier League) fever is running high in India. Most of our evenings these days are spent watching live-wire performances by the super talented cricketers. #IPL tweets have already reached a count of 3 million! Of all the national, international, veterans and newbies, one man who stands tall, not only for me but all the cricket lovers is Rahul Dravid.

For those of you, who have absolutely no idea about Cricket and Cricketers, here's a short intro. Rahul Dravid is one of the finest Indian cricketers, with exceptional figures to support the fact. Popularly known as 'The Wall' for his formidable cricketing career. Read more here. And I'd urge everyone to read because I am sure you'll unearth some greatness here. I did!!

The story goes that I have been a fan of this fine gentleman ever since I first saw him on TV. Not so much so for his cricketing skills but for his good looks and the composed personality. With each match watched and the questions fired to Dad, I understood the game better and also Dravid.

My first company had an office in Bangalore. Dravid's home city. And I always wanted to be posted there just to have a glimpse of this great man. But that never happened.

Last weekend, we had our tickets booked for the match between Delhi and Rajasthan. Rajasthan being led by Dravid. I was standing outside the stadium waiting for Sanket and Mummy to join me. Having nothing better to do, I picked up a chat with the kids selling banners on the road-side. We were busy learning each other's names, when a bus drove past us. I turned to have a look and Dravid was right there!! Trust me, he is absolutely as handsome as he looks in the pictures. Who cares what his age is! And we can keep aside the fact that both of us are married ;)

I literally skipped a heartbeat, with my eyes glued on that first row of the bus where Dravid was seated. I jumped with joy. Again, literally! The security guard got a break from his boring routine and enjoyed my excitement too ;) I wanted to shout out loud but held it back for the stadium.

It was then the time for the game. While the Delhites cheered for their home team, I shouted out "D-R-A-aaaaa-V-I-iiiiii-D" to my heart's content. My throat had started to hurt and the knees were shaking but I could not let that chance slip off. And the shouts did not go in vain. He replied back! No, he did not shout out my name... he replied with awesome shots.

To sit in the home city and support the rivals, is not easy. I did get some stern looks from disappointed Delhi fans, when Delhi was on the verge of losing and was challenged by two barely into their teens boys that Delhi would win but ultimately... it was a victory for Rajasthan and Man of the Match for SIR Rahul Dravid.

Glory!! The evening could not have been better :)

And before you guys leave thinking how crazy one can be, can I quickly slip in a Holi collage? Please! OK... Thank You :) 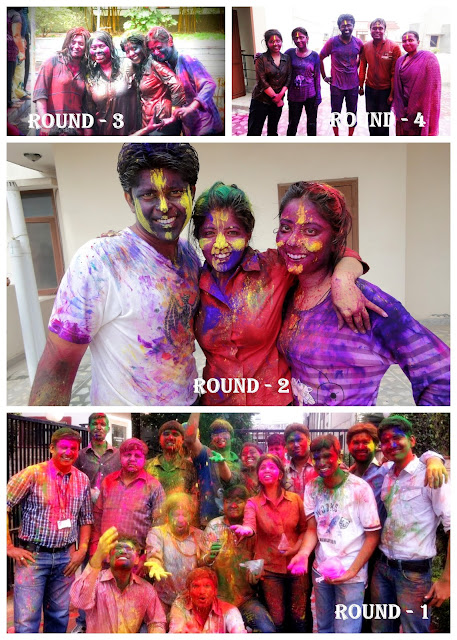 Time for me to hit the bed. Looking forward to an exciting weekend. Hope things go as they are planned. Will be back soon to share the latest addition to the crafty addiction! Stay tuned!

Have a fruitful weekend and that includes doing absolutely nothing at all ;)