It's all about Winning!!

The country is painted Saffron and Green... and it's people are dreaming-breathing-bleeding Blue!!
Children running around in the house humming De-Ghumake and their parents doing mental calculations to avoid work on Wednesday. Mass bunks in colleges and the happy and relieved professors. The 'Ganne-ka-juice-wala' tuning his radio and the auto-walas finding the perfect spot to park their vehicle and set an angle to get a glimpse of the TV in the store across the street. Patients enjoying being in the waiting area with their eyes glued on Star Sports and the big-shots trying their best to make it to Mohali.

Irrespective of their love for the game, the people of both the playing nations will be 'cricketized'. Why only the Indians and Pakistanis? In fact every sports enthusiast, who knows the game, understands the passion and relates to the aggression will feel the adrenal rush. The Kangaroos will keep aside Ponting's step down, the Proteas will forget that they have been thrashed out of the tournament and the Lankans will take down notes with every ball that will be played.

Internet is blazing with news about this deadly clash... rumors about match-fixing, soaring prices of flight tickets to Mohali, 'Who will win the Second Semi-final' polls, all kinds of images and videos. The following videos pumped my blood making me all the more anxious. Looking forward to a breath-taking performance by both the teams, some exchange of words, stern looks and smiles, huddles and hugs, views and reviews!!


Diwali in Summer or Eid in moon's last quarter? Well, like all the other Indians even I hope to 'see' my country lit up with crackers, Facebook being rocked with 'Jeet gaya bhai jeet gaya' kinda status updates and the most-awaited news headlines flashing all over the screens!! Nothing can beat the excitement. My alarm for 4 AM is already set and I am counting hours :) 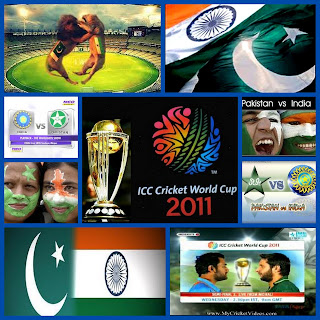 Just a few more hours to go before MS Dhoni and Shahid Afridi walk down to the center, toss the coin, make the call and take the decision. Within the next 15 minutes, we might see the Little Master with his batting kin, Virendra Sehwag on the field. The crowd roaring like untamed tigers. First ball to Sehwag, hit away for four... Tendulkar's 100th ton... and a mammoth score on the board. A few hours later, Zaheer might bowl a fantastic yorker to knock down the last wicket, commentators joyously declaring India as the team to meet Sri Lanka in the finals at Mumbai, crowd going frenzy and the players jubilating. Sounds perfect... isn't it? Let us all say "Amen" in unison for even Gods cannot ignore a billion prayers!!